Kazakhstan to conduct large-scale investigation into causes of mass riots 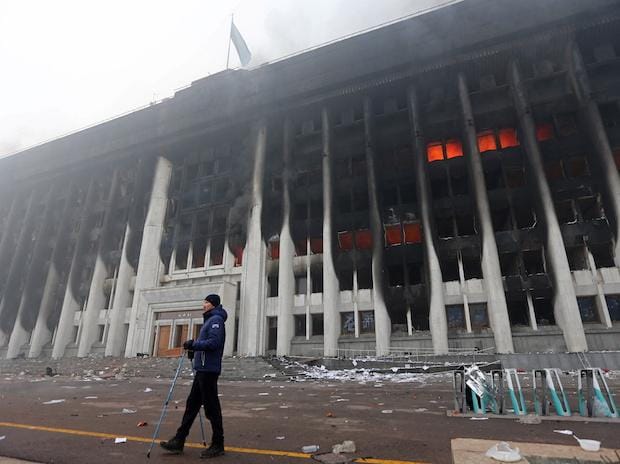 A man stands in front of the mayor's office building which was torched during protests triggered by fuel price increase in Almaty, Kazakhstan (Photo: Reuters)

The Kazakh law enforcement will carry out a major investigation into the causes of the mass riots and will present the results to the world community, Kazakhstan's Foreign Ministry informs, emphasizing that the country had been targeted by well-coordinated terrorist groups.

"Law enforcement agencies have been instructed to conduct a large-scale investigation of the causes of the current situation, the results of which will be presented to the international community," the ministry said in a statement published on Telegram.

The ministry called on the media not to distort information regarding the unrest in Kazakhstan and emphasized that the law enforcement and the military are currently standing up against terrorists and not peaceful protesters.

"As the events in the city of Almaty and a number of other regions of the country showed, Kazakhstan was subjected to armed aggression by well-coordinated terrorist groups trained abroad. According to preliminary data, there are persons among the attackers who have experience of combat participation in hot spots on the side of radical Islamist groups," the Kazakh foreign ministry said. (ANI/Sputnik).