The previous record was 1.03 million cases on January 3

The United States reported at least 1.35 million new coronavirus infections on Monday, according to a Reuters tally, the highest daily total of any country in the world as the spread of the highly contagious Omicron variant showed no signs of slowing.

The previous record was 1.03 million cases on January 3. A large number of cases are reported each Monday due to many states not reporting over the weekend. The seven-day average for new cases has tripled in two weeks to over 700,000 new infections a day.

Not all states have yet reported on Monday and the final figure is likely to be even higher.

The record in new cases came the same day as the nation saw the number of hospitalized Covid-19 patients also hit an all-time high, having doubled in three weeks, according to a Reuters tally.

There were more than 136,500 people hospitalised with Covid, surpassing the record of 132,051 set in January last year.

While the Omicron variant is potentially less severe, health officials have warned that the sheer number of infections could strain hospital systems, some of which have already suspended elective procedures as they struggle to handle the increase in patients and staff shortages. 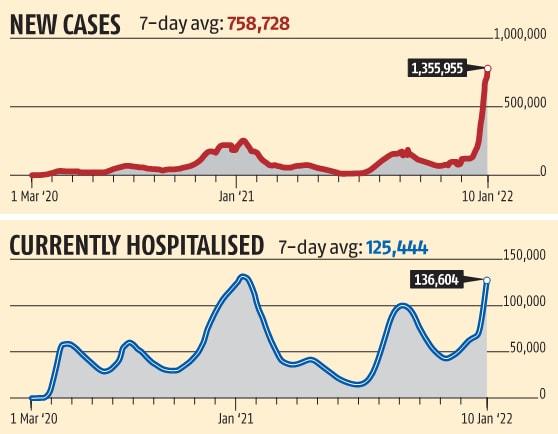 The surge in cases has disrupted schools, which are struggling with absences of staff, teachers and bus drivers.

Chicago canceled classes for a fourth day as the district and teachers failed to agree on how to deal with increased infections.

New York City suspended service on three subway lines due to a large number of workers out sick, according to its Twitter account. Companies' plans for workers to return to office have also been derailed.

Deaths are averaging 1,700 per day, up from about 1,400 in recent days but within levels seen earlier this winter.

A redesigned Covid-19 vaccine that specifically targets the Omicron variant is likely needed, Pfizer Inc's CEO said on Monday, adding his company could have one ready to launch by March.

Covid-19 hospitalizations in the United States reached a record high on Monday, according to a Reuters tally, as a surge in infections caused by the highly contagious Omicron variant strains health systems in several states.

There were 132,646 people hospitalized with Covid, surpassing the record of 132,051 set in January last year.

Hospitalizations have increased steadily since late December, doubling in the last three weeks, as Omicron quickly overtook Delta as the dominant version of the virus in the United States.

While potentially less severe, health officials have warned that the sheer number of infections caused by the Omicron variant could strain the hospital systems, some of which have already suspended elective procedures as they struggle to handle the surge of patients amid staff shortages.

The seven-day average for new cases has doubled in the last 10 days to 704,000. The United Stateshas averaged over a half a million cases for the last six consecutive days, according to a Reuters tally.

Only seven states have not set records for Covid-19 cases in 2022—Arizona, Idaho, Maine, Montana, North Dakota, Ohio and Wyoming, according to a Reuters tally.

Washington, D.C., is leading the country in new infections in the past week based on population, followed by Rhode Island, New York, New Jersey, Massachusetts and Vermont.

Omicron may infect half of Europe: WHO

More than half of people in Europe are on track to contract the Omicron variant in the next two months if infections continue at current rates, the World Health Organization said. Speaking at a press conference, regional director Hans Kluge warned that the Omicron variant represented a "new west-to-east tidal wave sweeping across" the European region.

British Prime Minister Boris Johnson engulfed in a fresh row over an alleged Downing Street party he reportedly attended with wife Carrie in apparent breach of the country's lockdown rules in May 2020. The Opposition Labour Party will be raising the issue as an urgent question in the House of Commons as details of a BYOB party email invitation sent to around 100 people emerged.

The European Union ended travel curbs on flights from southern Africa well over a month after imposing them to in hopes of containing the spread of the omicron variant. The variant was first discovered in southern Africa in late November and the 27-nation bloc restricted travel for visitors from that region.

Poland's total number of Covid deaths crossed 100,000, the health minister said, as the country struggles to convince people to get vaccinated despite persistently high infection. The number of deaths per one million was last week among the highest in the world, according to data by the University of Oxford, at more than 57 compared to around 34 in the United State.

Economist Larry Summers was right before on inflation—and ha...

The pound plunges to an all-time low early Monday as the mar...