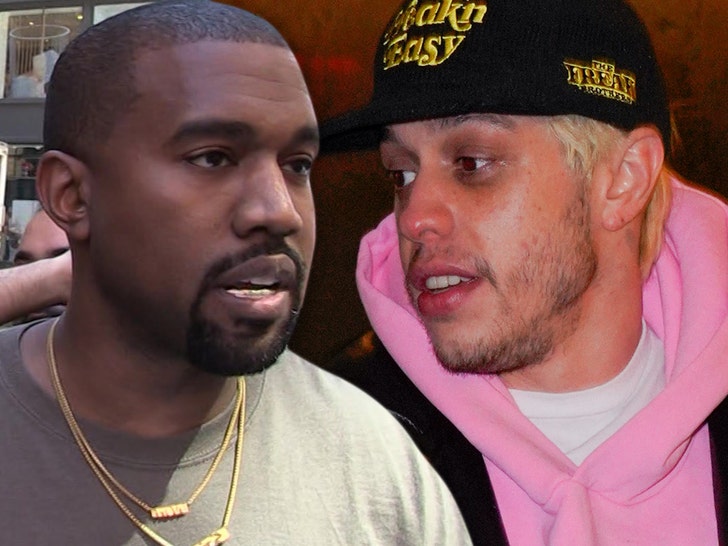 Kanye West doesn't sound too cool with Pete Davidson dating his estranged wife -- and on the heels of him allegedly punching a fan, he's got a pretty heated message for the 'SNL' star.

Ye takes the jab at Pete on his new track with The Game called "Eazy" ... a snippet leaked on the Internet ... and in it, Kanye goes right at Kim Kardashian's new bae.

Kanye raps ... "God saved me from the crash, just so I can beat Pete Davidson's ass."

The leaked clip sounds kinda rough -- it's supposed to drop Friday night at 9 PM PT -- so, it's possible Kanye removes the line from the final edit ... he's known to make last-minute changes. Fans are speculating the single will be featured on "Donda 2" and Game's "Drillmatic" album ... as both rappers posted the clip.

Now, even if Ye cuts the line ... the fact he even recorded it says a lot about his feelings about Kim, and each of them moving on after their marriage.

It's not hard to figure out why Kanye might have beef with Pete. As you know, Kim and Pete have been out and about -- most recently grabbing pizza in L.A. this week -- and seem to be getting much closer.

Of course, Ye's also been very public about his relationship with Julia Fox ... they were out Wednesday night in Hollywood, and even kissed in front of a swarm of paparazzi.

But, as we reported ... a few hours later something or someone put him on edge, and he allegedly punched an autograph seeker outside his hotel in DTLA.